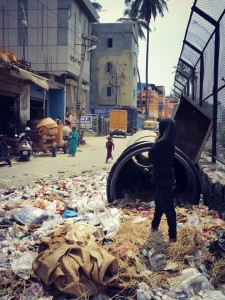 Bangalore as an almost mega city once had the name of being ‘the garden city’. We still have gardens and parks, and it seems to still be one of the priorities to create green spaces.

However, it seems that more and more public, open spaces are disappearing. Taking your children to nearby parks is becoming more difficult. Many parks are gardened or ticketed and made less accessible for children. Having green spaces seems to become more important than having open public spaces, where people can freely take their children and chill out themselves.

There have been reports of playgrounds turning into illegal dumping grounds. With almost 10 million citizens living in Bangalore, we only count around 150 playgrounds that are in rather good condition.

No one can prevent Bangalore from growing. So the issue of creating space, and so, public spaces, will continue to be an issue. However, let’s keep what we have and not turn the good into the bad. Keep open spaces clean.